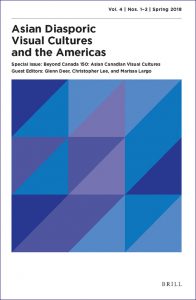 Asian Diasporic Visual Cultures and the Americas is a peer-reviewed journal that features multidisciplinary scholarship on intersections between visual culture studies and the study of Asian diasporas across the Americas. Perspectives on and from North, Central and South America, as well as the Pacific Islands and the Caribbean are presented to encourage the hemispheric transnational study of multiple Americas with diverse indigenous and diasporic populations.

This special issue of ADVCA, Beyond Canada 150: Asian Canadian Visual Cultures was edited by Glenn Deer, Christopher Lee, and Marissa Largo. The sesquicentennial anniversary of Canadian Confederation in 2017 was promoted across the country by the Canadian government as Canada 150, an expansive program that included an impressive host of events and activities, special programs, and legacy projects. The historical milestone, however, also prompted wide-ranging debates about what (and how) Canada 150 events should be organized, and whether 150 years of colonialism should be celebrated at all. This special issue examines the contours of Asian Canadian visual culture against the backdrop of the Canada 150 commemoration in 2017 in order to reflect on the complex relationship between global diasporas and national formations.

Glenn Deer teaches Asian North American Literature, Canadian Literature, Multi-Ethnic and Mixed Race Writing, Cultural Studies, and Theory in the Department of English Language and Literatures. He is the author of Postmodern Canadian Fiction and the Rhetoric of Authority (McGill-Queen’s University Press, 1994) and articles on race relations in Richmond, British Columbia, urban Vancouver space in Asian Canadian writing, culinary desire, and Asian Canadian photo-poetics. In 2012 he was a recipient of a University Killam Teaching Prize. He has worked as an Associate Editor for Canadian Literature since 1999.

Learn more about this editor » 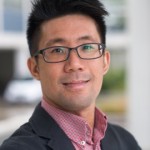 Chris Lee is Associate Professor of English and Director of the Asian Canadian and Asian Migration Studies Program (acam) at UBC. He is the author of The Semblance of Identity: Aesthetic Mediation in Asian American Literature (Stanford University Press, 2012) and a co-editor of Tracing the Lines: Reflections on Cultural Politics in Honour of Roy Miki (Talonbooks, 2013). His research focuses on diasporic Chinese literary thought during the Cold War and the cultural politics of Chinese Canadian historical narratives. He received a Killam Research Prize in 2015.

Learn more about this editor

Marissa Largo is a PhD candidate in the Department of Social Justice Education from OISE, University of Toronto. She was awarded a Joseph-Armand Bombardier Canada Graduate Scholarship in 2013 and collaborates with organizations that connect social activist art practices with community engagement.