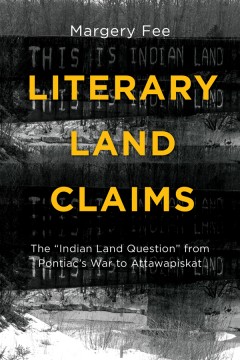 Literature not only represents Canada as “our home and native land” but has been used as evidence of the civilization needed to claim and rule that land. Indigenous people have long been represented as roaming “savages” without land title and without literature. Literary Land Claims: From Pontiac’s War to Attawapiskat analyzes works produced between 1832 and the late 1970s by writers who resisted these dominant notions.

Margery Fee examines John Richardson’s novels about Pontiac’s War and the War of 1812 that document the breaking of British promises to Indigenous nations. She provides a close reading of Louis Riel’s addresses to the court at the end of his trial in 1885, showing that his vision for sharing the land derives from the Indigenous value of respect. Fee argues that both Grey Owl and E. Pauline Johnson’s visions are obscured by challenges to their authenticity. Finally, she shows how storyteller Harry Robinson uses a contemporary Okanagan framework to explain how white refusal to share the land meant that Coyote himself had to make a deal with the King of England.

Fee concludes that despite support in social media for Theresa Spence’s hunger strike, Idle No More, and the Indian Residential School Truth and Reconciliation Commission, the story about “savage Indians” and “civilized Canadians” and the latter group’s superior claim to “develop” the lands and resources of Canada still circulates widely. If the land is to be respected and shared as it should be, literary studies needs a new critical narrative, one that engages with the ideas of Indigenous writers and intellectuals. 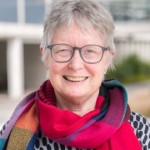 Margery Fee holds the Brenda and David McLean Chair in Canadian Studies (2015-2017) to work on early oral and literary production by Indigenous people in BC and the Yukon. With Dory Nason, she has co-edited Tekahionwake: E. Pauline Johnson’s Writings on Native North America forthcoming from Broadview Press in November 2015. She is now working on a new project in Environmental Humanities, a book on polar bears in the Reaktion Press Animal series, which she plans to connect to work on Inuit and Omushkego Cree stories about human-animal interaction. She has a paper forthcoming (with Shurli Makmillen), “Disguising the Dynamism of Law in Canadian Courts: Judges Using Dictionaries,” in The Pragmatic Turn in Law and Language, edited by Janet Giltrow and Dieter Stein (Berlin: Mouton de Gruyter) and is working on The Dictionary of Canadianisms on Historical Principles, 2nd online edition with editor-in-chief, Stefan Dollinger, to appear in 2016.