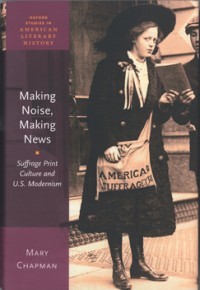 For most people, the U.S. suffrage campaign is encapsulated by images of iconic nineteenth-century orators like the tightly coifed Susan B. Anthony or the wimpled Elizabeth Cady Stanton. However, as Mary Chapman shows, the campaign to secure the vote for U.S. women was also a modern and print-cultural phenomenon, waged with humor, creativity, and style.

Mary Chapman (B.A., M.A., Queen’s, Ph.D. Cornell) is Professor of English at UBC. She specializes in US literature and transnational American Studies; in particular, she works on intersections between cultural forms, literary production, and politics in nineteenth- and early twentieth-century America.

Chapman’s current research involves unearthing the uncollected fiction and journalism of Asian-North American author Edith Eaton (“Sui Sin Far”) and positioning her within the popular transnational print culture of the 1910s. Becoming Sui Sin Far: Early Fiction, Journalism and Travel Writing by Edith Maude Eaton (forthcoming from McGill-Queen’s UP) assembles 70 uncollected texts most of which were written before she took up the pseudonym “Sui Sin Far”. Another volume, which collects her uncollected mature work, as well as a monograph that looks at Eaton’s use of the Afro-Asian analogy are works-in-progress.