Marinetti Dines with the High Command 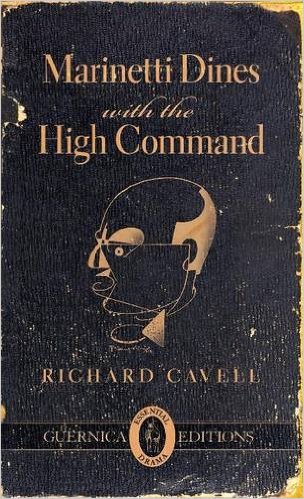 Marinetti Dines with the High Command is a work that dramatizes the turbulent life and times of F. T. Marinetti, founder of Futurism, the first global art movement. Marinetti’s artistic career raises enduring questions about art and politics because of his association with Fascism, and the second part of my work is an essay which explores the implications of this association. What makes Marinetti unique is that it is the first work that assesses Marinetti’s life in the context of a command performance he gave for the German High Command in January of 1934 — and the spectacular conclusion to that performance.

My research focus on media theory and Canadian Studies finds common ground in my publications on foundational media theorist Marshall McLuhan. I am the author of McLuhan in Space: A Cultural Geography (U Toronto P, 2002) and of Remediating McLuhan (Amsterdam UP, 2016), the editor of McLuhan Bound (Gingko, 2015), and the curator of spectresofmcluhan.arts.ubc.ca. Forthcoming publications include the introduction to the German translation of McLuhan’s Understanding Media (2015); “Mechanical Brides and Vampire Squids” in Vilém Flusser and Marshall McLuhan (Videopool, 2015); “Canadian Literature and Cultural Memory,” The Oxford Handbook of Canadian Literature, ed. C. Sugars (2015); “Canadian Cinema and the Intellectual Milieu,” The Oxford Handbook of Canadian Cinema, ed. W. Straw and J. Marchessault (2016); and “Anthems and Anthologies,” Anthologizing Canadian Literature (WLUP, 2015), ed. R. Lecker.